Some of the most drought-ravaged areas of the US are also heavily targeted for oil and gas development using hydraulic fracturing - a practice that exacerbates water shortages - according to a new report. Three-quarters of the nearly 40,000 oil and gas wells drilled in the US since 2011 were located in areas of the country facing water scarcity, according to research by the Ceres investor network. Over half of those new wells were in areas experiencing drought conditions. Hydraulic fracturing, or fracking, in those wells required the use of 97 billion gallons of water, Ceres found.
"Hydraulic fracturing is increasing competitive pressures for water in some of the country's most water-stressed and drought-ridden regions," said Mindy Lubber, president of the Ceres green investors' network. Lubber warned that the fracking boom across the US puts the industry on a “collision course” with other water users. Fracking is the highly controversial process of injecting water, sand, and various chemicals into layers of rock, in hopes of releasing oil and gas deep underground. Fracking in a single well can take millions of gallons of freshwater. Much of the drilling has occurred in areas mired in multi-year droughts. Half of the 97 billion gallons of water used since 2011 for fracking have gone to wells in Texas, a state in the midst of a severe, years-long drought. Meanwhile, oil and gas production through fracking is on track to double in the state over the next five years, the Guardian reported. The report also found that rural communities in the Lone Star State are being hit hard by the fracking bonanza occurring especially in the Eagle Ford Shale in south Texas. "Shale producers are having significant impacts at the county level, especially in smaller rural counties with limited water infrastructure capacity," the report said. "With water use requirements for shale producers in the Eagle Ford already high and expected to double in the coming 10 years, these rural counties can expect severe water stress challenges in the years ahead." Levels of vital aquifers that serve local communities near Eagle Ford have dropped by up to 300 feet in the last few years. Many small communities in areas of heavy fracking in Texas are in dire need of water, as supplies have run out in some places or will dry up soon in others. The Texas Commission on Environmental Quality says 29 communities across the state could run out of water in 90 days, and that many reservoirs in west Texas are at around 25 percent capacity. In December, the San Antonio Express-News found that fracking was using more water than previously thought. The newspaper reported that in 2012, the industry used around 43,770 acre-feet of water in 3,522 Eagle Ford fracking wells - about the same usage of 153,000 San Antonio households. “The oil and gas boom is requiring more water than we have,” Hugh Fitzsimons, a Dimmit County rancher and a director of the Wintergarden Groundwater Conservation District, told the Express-News. “Period.” A separate study published this week found that the industry does a very poor job recycling fracking water in Texas. Researchers at the University of Texas’ Bureau of Economic Geology found that 92 percent of water used in 2011 to frack Barnett Shale in north central Texas was “consumed,” and not recycled. Only about five percent of all water used for fracking in that area has been reused or recycled in the “past few years.” Other states do not fare well in the Ceres report, either. In Colorado, 97 percent of wells were in areas strapped for water, as demand for fracking water in the state is expected to double to six billion gallons – twice the annual use of the city of Boulder - by 2015. In California, 96 percent of new wells were located in areas where competition for water is high. A drought emergency for the entire state - which has traditionally dealt with water-sharing and access problems - was declared last month. 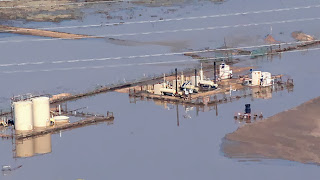 The report found similar high percentages of wells built in other states – such as New Mexico, Utah and Wyoming – where water shortages exist. "It's a wake-up call," said Prof. James Famiglietti, a hydrologist at the University of California, Irvine, according to the Guardian. "We understand as a country that we need more energy but it is time to have a conversation about what impacts there are, and do our best to try to minimize any damage."
Posted by AtmoWater Inc at 4:58 PM No comments: