Mexico Is Receiving Their 12th Atmospheric Water Generator & Puerto Rico Is Moving To Atmospheric Water Generators to Help Solve the Worst Drought in 20 Years
We are proud to announce, that we have shipped 12th Atmospheric Water Generator to Mexico. The WFC-15 unit has new technology designed to lower the energy requirements and make more water in areas with less relative humidity. Commercial Atmospheric Water Generators have been purchased and showcased throughout Mexico. Water Technologies has received indications of interest on the small, medium and large AWGs for use by municipalities, schools and hospitals. Most recently real estate developers have also shown interest in AWGs for large commercial and residential housing developments.
Puerto Rico is facing the worst drought in 20 years and the most stringent water rationing that has ever been imposed. In some areas tap water is on for 24 hours and off for up to 72 hours. Water is actually being turned off in many towns on the island. Families, restaurants, schools, municipalities, public areas are most affected. The aging water infrastructure struggles to meet the needs of the population in many areas. Resource experts say many other countries face a similar potential water crisis as a result of La Nina.
Mexico and Puerto Rico are in desperate need of clean drinking water for their people. When natural disasters are added into the equation it becomes a governmental responsibility to supply clean water and that is the situation Mexico and Puerto Rico have found themselves in. I know our products can make a difference in these areas. The warm and humid climate is perfect all year long for generating water from air. We have been working for months with these 2 new distributors. They have ongoing relationships with Governments and Institutions that can bring sales and long term partnerships to our company. The new distributors will cover two huge markets for Water Technologies' products. The need is growing because of the droughts, failing infrastructure and contamination of ground water supplies. There is a strong and immediate need for adequate clean water supplies to sustain life and provide water for industrial and real estate development projects!"
Posted by AtmoWater Inc at 9:05 PM No comments:

QUANTITY OF PHARMACEUTICALS IS MORE AMONG THE HOUSEHOLDS 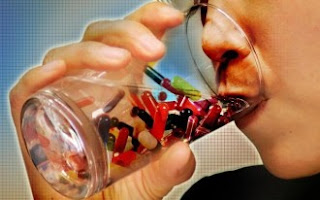 According to the new research, hospitals are not the only places where drugs are used rather the use of drugs at homes is also high. The matter causes issues for the water management as these drugs become a hurdle for them in the wastewater.

Although the treatment of wastewater is done through different treatment processes but they are not suitable enough every time to remove the pharmaceuticals from the water supply. This indicates that the drugs end up to the environmental waters. The issue is being watched by the policymakers deeply and eventually the new regulations are expected for the utilities.


The question arises that if these drugs are winding up in the sewage system, from where they are coming? Some researchers from Leuphana University took the question in the examination and published the results of the study according to which the major source of pharmaceutical drugs are the households in the wastewater. If a comparison is made with the hospitals, then the findings say that they contribute very less to this pollution. The quantity of the drug contaminants discharged from this source is small.


Even the share of painkillers in the hospitals is not of great amount. Metamizole which is a painkiller used very widely constitutes 22 percent share of the entire consumption. The study also identified the quantity of sedative Clomethiazole consumed in the hospitals along with the neuroleptic quetiapine which can be considered high.


Another drug that has considerably higher amount is the Moclobemide which is an antidepressant.


One of the leading persons in the study, Manuel Herrmann gave the demonstrations of the importance of the research. According to him, the study has been able to make them aware of the patterns of consumption by providing a clear picture of the things making the wastewater polluted. The method used by them regarding the procedures of measurement, there is the combined benefit of not being very complex and also it is cheaper. That is why the prediction of pollution is simple and the reaction of the policy and management is appropriate.


PPCPs are known for long and they are not the new matter for the water sector. These products are able to get escaped through the treatment plants of wastewater and wind in the waterways that has the water for drinking purpose as well.


Environmental Protection agency has kept these pharmaceuticals in the Third Contaminant Candidate List (CCL3). Some of the main elements of the study are as follow;


For years pharmaceutical companies were dumping drugs to sewage system and wastewater that eventually end up in our drinking water. One of the alternative of insuring clean water supply to population, that is pure and healthy, is to implement AtmoWater unique AWS 100 systems, which is non polluting, clean and great testing water.
Posted by AtmoWater Inc at 9:13 AM No comments:

Why Did L.A. Drop 96 Million ‘Shade Balls’ Into Its Water?

The plastic balls, which can save water and protect water quality, are an attempt to cope with California’s severe drought.
The Los Angeles Department of Water and Power released 96 million black shade balls into the Los Angeles Reservoir to reduce evaporation and deter algal growth.
Photograph by Gene Blevins, LA Daily News/Zuma Wire/Corbis Los Angeles has turned its main reservoir into a giant ball pit.
City officials hope millions of “shade balls” released into the Los Angeles Reservoir will save water in the midst of the worst drought in California history.
On Monday Los Angeles Mayor Eric Garcetti supervised the latest onslaught of 4-inch black plastic balls, bringing the total count to 96 million in the 175-acre reservoir. Located in Sylmar, the reservoir holds up to 3.3 billion gallons, enough to supply the city with drinking water for up to three weeks.
The city says the balls will shade and cool the water, reducing evaporation from the reservoir and making it less susceptible to algae, bacterial growth, and chemical reactions that can produce harmful substances.
The effort by the Los Angeles Department of Water and Power (LADWP) “is emblematic of the kind of creative thinking we need to meet [the drought’s] challenges,” Garcetti said in a statement. (See “When the Snows Fail”)
The balls cost 36 cents each, for a total of $34.5 million. The utility has been testing the concept since 2008, reporting that shade balls reduce evaporation by 85 to 90 percent. That should equate to saving nearly 300 million gallons a year, enough to provide drinking water for 8,100 people, said Los Angeles City Councilmember Mitchell Englander.
The balls also inhibit microorganism growth, reducing the treatment the water must undergo through other means. That could save the city $250 million over time, said Garcetti.
Made of black polyethylene, shade balls are filled with water so they don’t blow away. A coating resists ultraviolet light and degradation. The manufacturers (XavierC, Artisan Screen Process, and Orange Products) say the balls should last about 25 years.
Ed Osann, a senior policy analyst at the Natural Resources Defense Council, told Bloomberg that the shade balls probably won’t release any toxic materials into the water supply. (NRDC has not yet responded to a request for comment.)
California officials are finally looking to alternative sources to conserve and save California water recourses, however we are still not out of droughts and little measures alone are not going to be enough to recover and sustain water shortages. AtmoWater AWS water stations along with other creative improvements can make the difference and help California to recover and sustain water supplies for our and future generations.
Posted by AtmoWater Inc at 11:48 PM No comments: