BAGHDAD, Iraq, June 10, 2010 (ENS) - Iraqis are calling on their incoming government to devote more energy to resolving the country's chronic water problems, with some experts stating that water will be more important than oil in the long-term development of the country.

Even as recent rains have brought some relief to drought-stricken Iraq, the historic problem of water scarcity has forced tens of thousands of rural Iraqis from their homes.

An Iraqi man drinks fresh water from a new artesian well at the al-Hamza School in Bayjia, Iraq. (Photo by Task Force Marne)

Meanwhile, diplomatic tensions are running high as promises from upriver counties such as Turkey, Syria and Iran to allow more water into Iraq appear not to have been met.

This week, Foreign Minister Hoshiar Zebari denounced a plan by Syria to divert water from the Tigris River to irrigate some 200,000 acres of land as detrimental to Iraq's future water supply.

Iraq's Minister of Electricity Kareem Waheed called Syria's move a "shock" that would "embarrass" his ministry and undermine its commitments to hydropower. Both ministers decried Syria's plan as a breach of international conventions on down-river water rights.

"The next government will be challenged on the water issue and there is no option but to deal with it. I understand that Iraq faces more than one problem, but this one can't be ignored. No matter what the government is focusing on, this problem will impose itself," said Dr. Awn Thiab al-Ajeli, the head of Iraq's National Centre for Water Resource Management within the Ministry of Water Resources.

"The first step that should be made is to reach a deal with Turkey as well as Iran and Syria in order to have good, stable amounts of water enter to Iraq each day. The current situation is that the amount is good one day, and bad the next. To make this step, a deal must be made between governments, not just between two water ministries. It depends on the diplomatic relations between the two states," Ajeli said.

Officials have said in the past that security concerns have overshadowed the development of a forward-thinking water policy.

With Iraq's recent and relative stability, experts are now calling for a plan to tackle the water problems that have afflicted the country - from rising salinity in the southern marshlands to the imminent demise of traditional irrigation systems, known as karez, in the north. 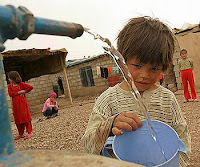 An Iraqi boy collects water in a camp for displaced persons at Gardasin, about 260 miles northwest of Baghdad. April 2010. (Photo courtesy UN High Commission for Refugees)

A UNESCO report found that 100,000 Iraqis have fled their native communities since 2005 due to water shortages.

Another United Nations report claims the water levels in the Tigris and the Euphrates rivers, Iraq's primary sources of water, have fallen by more than two-thirds. The report cautioned that the vital lifelines could completely dry up by 2040.

"At the current rates, Iraq's water supply will fall an estimated 43 billion cubic metres by 2015, far short of the 77 cubic metres that the country will need to avert a widespread humanitarian disaster," the UN report states.

According to UN research, "Inefficient irrigation, lack of government coordination and weak capacity to manage the resource has compounded the current shortage of water.

Social problems connected with water scarcity are common in Iraq - fishermen in the southern complain of a declining catches; in agricultural areas, water shortages have caused wheat production to fall by half.

According to the UN, Iraq now imports 80 percent of its food and 90 percent of Iraq's land is either desert or "suffering from severe desertification."

"Water is more important than oil for Iraq because we have agricultural lands which, without water, are useless. Agriculture is the future and the new government needs to see that," Ajeji said.

The Euphrates River at Dayr az Zwar, Syria, near the Syria-Iraq border (Photo by Shay Haas)

The political impact of water relations with upriver countries is not lost on the UN. "We believe that the problem has political dimensions between Iraq and [its neighburs], which are trying to put pressure on the Iraqi government to advance some economic and political interests. The maneuvering has already begun in determining how much water Iraq should really have," the UN report says.

"Listen, don't be naive. Upriver countries dominate down river countries because they control water revenue. This gives them advantages in other fields as well," Zubaidi said.

"Let's talk about Turkey and Syria. We have concerns that one day they will ask in return for water, one barrel of water for one barrel of oil," he said. "That day will come soon if Iraq maintains its ignorant strategies of wasteful water management."

The Baghdad government claims it is doing its part in seeking adequate water for Iraq and applying diplomatic pressure to upriver neighbors.

"We have formed delegations to visit Turkey, Iran and Syria to speak with them about sharing water because we face a serious problem in this regard. We have sent letters demanding the need to give us more water," said Jamal al-Battiq, head of parliament's agricultural committee.

Neighboring nations have been reluctant to address Iraq's water woes, but Mustafa Kibargolu, a professor at Bilkent University's international relations department, cautioned that water could be the source of conflict in years to come.

"[There hasn't been any] confrontation or high tension stemming from the unsatisfied demands of parties over the use of water. [But] this should not mislead observers into thinking this is unlikely," Kibargolu said.

"Unless some old water policies are purged and new ones introduced. It is a real possibility that this region will become a time bomb in terms of water rights."
Posted by AtmoWater Inc at 5:26 PM No comments: