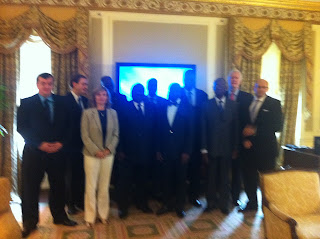 For several months, management of AtmoWater Inc was negotiating with the Ivory Coast ministry to set up 100,000 liter per day water station in Ivory Coast. With assistance of MAS Group AtmoWater Inc shall be insulting water stations and participating in one of the largest building project in Western Africa.
Posted by AtmoWater Inc at 3:52 PM No comments:

I would like to take a moment to congratulate our president reelect, all our people who went out to vote today for their candidate.  It has been a tuff road, and if one thing we have learned with election today is that our people of this great nation are more divided ideologically than ever before. We hope that President Obama shall start the hilling process and get our nation back on its track and we the people stand with him to make America great again.
Posted by AtmoWater Inc at 10:56 PM No comments:

In 2000, the scientific community which keeps track of the worlds water supplies began predicting that one out of three people in the world would have to factor water shortages into their lives by the year 2025. However, it happened several years earlier, according to a report presented in Stockholm during World Water Week in August 2008; the result of work compiled by 700 scientists from the International Water Management Institute.


Because of inadequate water supplies, and the limited infrastructure to deliver what is available, half the people in the world today lack the basic sanitation level.

Half the hospital beds on earth are occupied by people with easily preventable diseases caused by impure water. In the past decade more children have died from water related diseases than all the people killed in all the armed conflicts since World War II. Access to clean water could save two million lives a year.

Posted by AtmoWater Inc at 2:58 AM No comments:

Posted by AtmoWater Inc at 6:59 PM No comments:

Posted by AtmoWater Inc at 6:24 PM No comments:

Exchange traded funds based on the water industry could be on the verge of major growth as rapid expansion and greater demand in the emerging markets drive the global water industry.

According to Harri Kerminen, CEO of Finnish chemicals firm Kemira, the global water industry may grow to $800 billion by 2035, report Nina Chestney and Henning Gloystein for Reuters. Other industry experts project the market will expand to $1 trillion by as early as 2020.

“Water is the fastest growing market at the moment, with a size of $500 billion globally,” Kerminen commented. “Most of that growth is in South America and Asia. By 2035, we estimate 50% of the whole market will be in Asia, and it could be worth $600 to $800 billion.”

Kemira points out the opportunities offered in South America and Asia, which are bracing for rapid economic growth, climate change, growing populations and regulatory reforms.

“The problem is, the water is the wrong quality in the wrong place. Just 1% is available for industrial and society use,” Kerminen remarked. “If nothing is done, there will be a 40 percent gap between supply and demand by 2030.”

Kerminen also points out the integration of water and energy sectors as a key area of growth. He believes this area may benefit from greater progress toward efficiency. Additionally, the move from re-treatment of waste water may could cheaper alternative to desalination, which is highly energy intensive.

“At the moment, there is not enough pressure cost-wise so people don’t act. But within 10 to 20 years, more of these solutions are needed,” Kerminen added.

Posted by AtmoWater Inc at 10:54 AM No comments:

US intel: water a cause for war in coming decades

WASHINGTON (AP) — Drought, floods and a lack of fresh water may cause significant global instability and conflict in the coming decades, as developing countries scramble to meet demand from exploding populations while dealing with the effects of climate change, U.S. intelligence agencies said in a report released Thursday.


An assessment reflecting the joint judgment of federal intelligence agencies says the risk of water issues causing wars in the next 10 years is minimal even as they create tensions within and between states and threaten to disrupt national and global food markets. But beyond 2022, it says the use of water as a weapon of war or a tool of terrorism will become more likely, particularly in South Asia, the Middle East and North Africa.

The report is based on a classified National Intelligence Estimate on water security, which was requested by Secretary of State Hillary Rodham Clinton and completed last fall. It says floods, scarce and poor quality water, combined with poverty, social tension, poor leadership and weak governments will contribute to instability that could lead the failure of numerous states.

Those elements "will likely increase the risk of instability and state failure, exacerbate regional tensions, and distract countries from working with the United States on important policy objectives," said the report, which was released at a State Department event commemorating World Water Day.

Clinton, who unveiled a new U.S. Water Partnership that aims to share American water management expertise with the rest of the world, called the findings "sobering."

"These threats are real and they do raise serious security concerns," she said.

The report noted that countries have in the past tried to resolve water issues through negotiation but said that could change as water shortages become more severe.

"We judge that as water shortages become more acute beyond the next 10 years, water in shared basins will increasingly be used as leverage; the use of water as a weapon or to further terrorist objectives, also will become more likely beyond 10 years," it said.

The report predicts that upstream nations — more powerful than their downstream neighbors due to geography — will limit access to water for political reasons and that countries will regulate internal supplies to suppress separatist movements and dissident populations.

At the same time, terrorists and rogue states may target or threaten to target water-related infrastructure like dams and reservoirs more frequently. Even if attacks do not occur or are only partially successful, the report said "the fear of massive floods or loss of water resources would alarm the public and cause governments to take costly measures to protect the water infrastructure."

The unclassified summary of the intelligence estimate does not identify the specific countries most at risk. But it notes that the study focused on several specific rivers and water basins. Those included the Nile in Egypt, Sudan and nations further south, the Tigris and Euphrates in Iraq and the greater Middle East, the Mekong in China and Southeast Asia, the Jordan that separates Israel from the Palestinian territories, the Indus and the Brahmaputra in India and South Asia as well as the Amu Darya in Central Asia.
Posted by AtmoWater Inc at 9:59 AM No comments: